There are several ways to learn to give Lo Shu readings and I’ll cover a couple that I recommend — they’re my favorites because they make learning Lo Shu numerology very quick and easy.

First, let’s look at what a Lo Shu reading consists of — and know that there are several “flavors” of Lo Shu so if you see something different here than you’ve seen before, that’s why.

There are three steps to a basic Lo Shu reading:

A Lo Shu reading is given using a grid of nine squares and the digits of someone’s birthday are distributed throughout that grid. The version of Lo Shu that I like best uses numbers that end up making a “magic square” — every row, column, and diagonal adds up to the number 15.

(Just for the fun of it, add those digits together to get the number 6, which means Communication, and that shows what Lo Shu is all about — letting people communicate with their own personality traits.)

Once you know where the numbers go, get someone’s birthdate and put the digits in the correct spots. (If there’s a zero in the date, just skip that. Lo Shu doesn’t use zeroes at all.) For example, all of the 4s in the birthdate go in the upper-left corner, all the 5s go in the center square, etc. Let’s use the birthdate December 27, 1976 to create a grid that looks like this:

Now it’s time to give the reading use the arrows in the grid as well as those numbers that have more than one digit in the square — in our example that would be 1, 2, and 7.

The dashed arrow in the first column means – (minus) Thought, so that person is probably spontaneous. Instead of thinking things through, she tends to jump in with both feet!

The solid arrow in the last column means + Outlook, so that person has a great outlook on life. People like being around her because she’s inspiring to others.

The meaning for the number 1 is Beginnings, so this person loves starting new projects. In fact, starting anything new is something that really excites her.

The meaning for number 2 is Cooperation, and one trait of people who have that number is their willingness to be open-minded and fair.

Finally, the meaning for number 7 is Spirituality, which means she has a continuous search for knowledge, a desire to find the hidden truths that others may not even know exist.

That’s just a bare bones reading — there are many additional things you can glean about this person just from those traits. For example, someone who jumps into things without thinking first, and who also loves starting new projects… Uh oh, that could be a recipe for never finishing things, so watch out for that!

How To Give Your First Reading

You can see from those three steps that giving a reading isn’t complicated. (But it is tremendously fun!) You do have to know the meanings of the arrows and the numbers but I’m going to tell you about two things that will help you learn those few things.

Speed Learning Numerology: Numbers Past and Present with the Lo Shu Square This is the book that got me started in Lo Sho numerology and I recommend it very highly. You can get the Kindle version for just a few bucks and it’s a fantastic value. The book includes a system for easily memorizing the meanings of the numbers and arrows that will have you up and running very quickly.

Plus, the author, Julian Moore, includes a 4-part reading that will blow people away. When I have just a few minutes with people I’ll do a reading just based on the birthday, but if they want a longer, more in-depth reading, I’ll whip out the 4-phase routine shown in Speed Learning Numerology.

Get the Book on Amazon

This is something I created after learning Lo Shu from Julian’s book. I thought it would be cool if there were cards that could be used during a reading to give a sense of ceremony or drama to the reading — and at the same time, act as a “safety net” so I wouldn’t worry about forgetting one of the number or arrow meanings!

The Lo Shu Deck comes in a velvet bag containing 30 beautifully designed cards — one each for the numbers plus one for each of the arrows that can show up on the grid. And then a few extras that will come in handy.

The Lo Shu Deck also comes with step-by-step instructions online for using them in your own Lo Shu readings plus complete tutorial videos to show you exactly what to do!

As you can see from the picture, since the meanings are right on the cards, you never have to worry about forgetting what one of the numbers or arrows mean!

Buy the Lo Shu Deck Now
Tell Me More About It 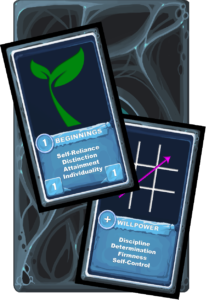